Originally published May 10, 2018, on www.churchforvancouver.ca

Earthkeepers: Christians for Climate Justice began over three years ago when several Christians met one another during the demonstrations and civic action when Kinder Morgan was first beginning excavation and construction work on Burnaby Mountain.  Last week, we returned to Burnaby Mountain to stand with other Christians, Jews, Buddhists, Muslims, and Unitarians in solidarity with our Tsleil-Waututh neighbors in the Day of Action for People of Faith. Last week highlighted how far along the Kinder Morgan Pipeline Expansion had progressed and how the call to action has never been more urgent.

At Earthkeepers, we’ve prayed for Canada to honour its climate commitments and commitments to respect Indigenous rights; spoken to churches and Christians about the Kinder Morgan pipeline; signed petitions and written letters to our elected leaders to give a fair and rigorous environmental assessment review to the Trans Mountain pipeline expansion and seek meaningful consent from First Nations; and attended the Protect the Inlet march along with thousands of Canadians.  Last week’s event was an opportunity to tangibly witness to the danger that a pipeline expansion would pose to our common home here in unceded Coast Salish territories as well as the global effects of climate change on our neighbors, including the least of these and the global poor that have little to no contribution in carbon pollution but bear its effects. 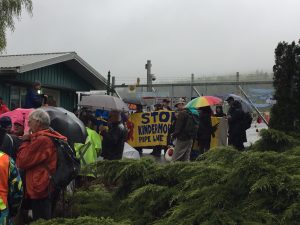 The day began with an information session on civic action.  The information session we attended on the legal implications of disobeying the court injunction and being charged with criminal contempt of court, the ramifications of approaching were sobering.  The consequences could be wide-ranging – increased scrutiny and questioning when traveling or crossing the border; having our photo or image captured by the RCMP and facing increased surveillance; the possibility of not having work visas renewed or citizenship approved; and other consequences that could follow us in our lives.  Even just the thought of breaking the law was discomforting for those of us who have never even had a traffic ticket.

Afterwards, we marched and prayed at the gates of the Kinder Morgan tank farm entrance on Burnaby Mountain with 100 others who were from Christian denominations and other faiths.  We held our denominational and church banners and signs, wore our clerical clothing or other symbols of our faith like crosses, and we marched in procession together. We left prayers written on cloth and paper, along with emblems and symbols of our faith (like prayer beads and rosaries) at the gates of the facility; sang hymns and songs; stood in solidarity with our Tsleil-Waututh hosts; and braved the rain as we waited for the Burnaby RCMP to arrive. Some chose to stay and stand at the gates to be read the court injunction before walking away while 7 chose to be engage in direct civil disobedience and risk arrest. Those who did not stand in the injunction zone gathered in the public area just outside; holding our banners and standing in support.

Scientific evidence has shown that the continued expansion of the tar sands and other oilfields poses serious and irreversible threats to climate stability, undermines Canada’s ability to meet its carbon pollution reduction targets, locks our societies into continued dependence on oil and gas, and irrevocably changes the land and water from the boreal forests of northern Alberta to the mouth of the Fraser.  We know that an oil spill on land or water can kill birds, animals, fish, and whales and with them the loss of food and ways of life for our Aboriginal neighbors. We now know that an oil spill is not just an “if” but a “when” – and when that happens, the impacts to Metro Vancouver, the Fraser River, the Salish Sea are irreversible and long-lasting.

Fifty years ago, the majority of Christians and white churches in the USA stood on the sidelines when Martin Luther King Jr. and supporters marched in Montgomery and the South and called for desegregation and equality.  Some Christian leaders criticised him for disturbing the status quo and implored him to be patient and submissive to the powers of government and of the state. In Letter from a Birmingham Jail, Martin Luther King Jr. responded that injustice for some was injustice for all , and warned of how apathy also enables oppression.  Today, we have the opportunity to join our Coast Salish and other aboriginal neighbors that are calling for meaningful action on reconciliation and the implementation of the UN Declaration of Rights of Indigenous Peoples, particularly as it relates to protecting Indigenous traditional territories and ensuring meaningful participation in decision-making, including consent for pipeline projects.

Last week was not a just a march or an event. It was a show of unity amongst Christians and people of other faiths to witness to our love for our common home and for creation.  It was an opportunity to not stand on the sidelines, but rather to reach out in solidarity to our Aboriginal neighbors who have lived in these lands before us and who are fighting to protect these traditional territories and their way of life. It was a tangible witness to the hope for another type of an economy that is kinder and respectful of God’s creation and inclusive for all, and a call to stand for climate justice. It was an opportunity for us to live out our biblical calling to care and steward for the earth as earthkeepers.

Written by the Earthkeepers: Christians for Climate Justice leadership team.

If you haven’t already signed up for the Earthkeepers’ Earth at Eleven campaign, you can join in prayer with us about the Kinder Morgan Pipeline expansion by checking out https://www.theearthkeepers.org/kinder-morgan/earth-at-eleven!