Earthkeepers’ founding member Nelson Lee reviews a new book fresh off the press: A Climate of Desire: Reconsidering Sex, Christianity, and How We Respond to Climate Change

The heat wave of 2018 – nearly global in extent – has probably shifted acceptance that our climate is changing in a bad way. In fact, changes in the climate are having greater consequences than any other global phenomenon ever has. In British Columbia, where I am from, we just witnessed the greatest forest fires in any particular year, right after suffering the same the previous year.

We should “get it” by now. Still, most of us don’t know why or if we should act around climate change, and what we should do. The question is acutely relevant for followers of Christ, knowing that the unprivileged are taking the harshest brunt.

Dealing with such questions, timing could not be better for a new book addressing this global emergency from a promising (yet unconventional) angle. Written by someone who is an engineer as much a theologian and a poet, A Climate of Desire approaches the issue in fresh ways. Not only does Eduardo Sasso make sure to draw from his theological training rooted in various expressions of Christianity, but he also writes with feet rooted in both hemispheres, being a Costa Rican living in Canada since 2008. Still shy of middle age, his views are nevertheless anything but naive: More like a seasoned veteran with a broad perspective, Sasso argues with evidence and passion.

The Book in a Snapshot

Following a provocative first chapter highlighting the (sexual) oracles of the biblical prophets, the book moves to explore some of the social and ecological vital signs of where we are at, of how we got here, and of where we need to go as responsible citizens. Regardless of whether we’re Christian, secular, or agnostic, Sasso wakes us up to the seriousness of climate change and its causes. Not only does he outline the physical impacts that we are experiencing now, but he also unfolds unexplored implications for Christians or wealthy citizens living in the dire situation we are in already.

The book makes clear that our view of God and of the living creation matters, and Sasso’s stories and arguments make a very convincing case for getting that relatively right – and for living like it matters. But to prove his case, the author does not simply enlighten with his opinions; he also introduces his readers to diverse views backed up by almost 200 footnotes, themselves grounded in prime scholarly works. (This book has now become the source for choosing my future reading for months, perhaps years to come.)

I understand that Sasso was addressing a North American audience in their 20s and 30s. However, his appeal reached me in my 60s. Having lived overseas for 15 years, I think anyone affected by climate change can appreciate his book. It’s not full of jargon. The themes introduced are clearly explained, making it is suitable for the novice. Still, that doesn’t impede the author from a cutting-edge presentation of some of the best thinking on climate change, Christianity, human philosophy, politics – and sex. This blend makes Sasso’s work stand out amongst the dozens of books I have recently read on the subject.

Why I Chose to Read A Climate of Desire 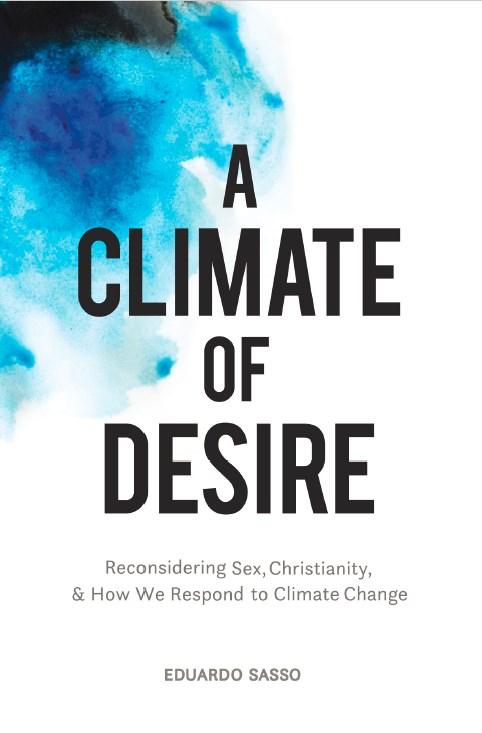 I picked up this book because I gobble-up writing and videos on climate change and Christian thinking/action on creation care. To have them both in one book is a rare treat that I hope will encourage more to write in this space. I say “rare” because too few Christians think climate change is a result of our alienation from God. Most either think climate change is not caused by us humans, or that we can’t do anything about it, or that it doesn’t matter because God is sovereign and only God can work things out to solve our problems in the end.

I also chose the book because I happen to know a bit about the life of the author, so his integrity and commitment of course drew me in as well. I was a little curious about what he thought was the relationship between sex, Christianity, and climate change, and I was happy to learn that it’s not just a gimmick to catch the attention. There are real and fundamental connections that Sasso deals with very respectfully. Without spoiling it for the reader, suffice it to say that instead of orienting our deepest desires towards loving God first, we often misplace our longings by putting sex on a pedestal – and the exchange has left us with a wild climate.

My Bias in Writing This

Personally, I no longer fit in the camp of secularist (which I was until 38), having both reasoned and experienced a creator and sustaining God. Nor am I a Christian who thinks climate change might be important, but of less importance than sharing the gospel. This is missing the point of the scriptures and of what Jesus taught, reminding us that what ultimately matters is how we treat people and especially the unprivileged (Matt 25:31-46). Think of the needy in a world with a changing climate!

So I endorse this book with such clear bias, being a Christian who thinks that climate change is the top issue for the church – the sort of issue that separates the sheep from the goats. How we respond to climate change shows how we love God and others. That being said, I am persuaded that any open-minded person willing to read about Christian thinking and climate change will appreciate Sasso’s insights. His writing spans history but is also very up-to-date. He also never reads like a textbook, but is always clear and compelling.

What Makes the Book Unique

Beyond being a scholarly book, A Climate of Desire is rich in anecdotes and poetic techniques that perk the reader to see differently. The book contains flashes of Sasso’s story in Costa Rica, a place known for displaying God’s glory through its natural beauty. But his pages also contain our story, and the world’s story.

As a Vancouverite, I also see the glory of God in mountains, water, trees, and animals. In turn, my home happens to be built on the traditional land of the Coast Salish peoples. They have managed to live in relative harmony with the creation for over 10,000 years – not least because they continue to recognize that the land does not belong to them but to the One whom they recognize as “Creator.” So why have we Christians, here and globally, ignored such connection? Sasso has answers; so read and see…

To sum up, I’d like to highly recommend this book for at least two reasons:

Through the psalmists and the prophets, God often groaned that people had eyes but nevertheless could not see. We Christians seem to be no different; because that’s kind of where most of us are at with climate change – especially this year. Should we wake up and see more clearly?

By unveiling our misplaced desires and how our thinking has devolved since the times of Jesus, Sasso opens our eyes, inviting us to desire God above all else. But he also engages with scientists and theologians to lay down a path to follow, summoning us to move away from being disengaged citizens to become, instead, faithful earthkeepers.

More than ever before, the time is ripe.