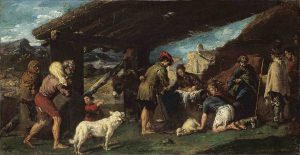 “For unto you is born this day in the city of David a Saviour, who is Christ the Lord.” Luke 2:11

Imagine you were among the shepherds who heard those angelic words, so many years ago.

What would you have felt? What would have gone through your mind?

Would it be joy? Elation? Terror? Incredulity?

As the story goes, the shepherds were ecstatic, rushing off to find this child of whom the angels spoke. Yet if I were one of those shepherds, hearing of one “wrapped in swaddling clothes and lying in a manger”, I must confess:

I think I’d be a little…underwhelmed.

After all, this is the one who is supposed to liberate us from bondage to the Roman Empire! What is a tiny baby born in a dirty stable going to do about suffocating taxation, imperial violence, the iron fist of colonial rule? We need a charismatic, dynamic ruler, damn it! – not the whimpering son of a lowly peasant girl.

Yet maybe, in their excitement, those shepherds understood something I don’t. Maybe, through their own experience as society’s marginalized and “unclean”, they could grasp that the truly revolutionary answer to oppressive military, economic, and religious power is not simply someone else to hold it, but a different sort of power altogether. Maybe they saw the seeds of hope in this child’s vulnerability, in his birth as one of them: the common people, the trampled upon, the forgotten. Maybe they glimpsed a future leader marked, not by prestigious lineage or wealth, but by humility, solidarity, and compassion.

Today, as we grapple with the alarming reality of existence on a planet whose life systems are going into critical, it is so easy in our desperation to clamber for grand, powerful solutions. Build nuclear power. Drench the atmosphere with sulfate to dim the sun. Vote in the “right” people to overhaul government. Even mass investment in solar power, divorced from any deeper change of orientation as a society, merely presents us with new forms of the same technocratic worldview that has led our planet to its current ecological precipice.

So let me be quite clear. The power which will save us and this suffering planet is not individual. It is not technological. It is not the market, or the government. It is not even religious institutions, Christian or otherwise.

No, the power which will save us is spiritual, is communal, and through the Christmas promise of God with us, we know it is ours. It is love, embodied, generous, courageous, militant even – but at the end of the day, always and only love. 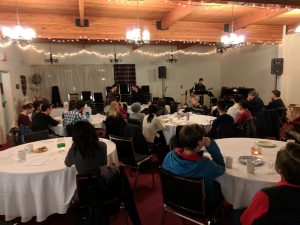 I saw glimpses of that power this Saturday at “Carols for the Climate”, Earthkeepers’ recent event raising money for First Nations who are fighting the Kinder Morgan pipeline expansion in court. Compared to the all-encompassing planetary crisis of climate change, 50 people gathered in a room to sing carols, drink apple cider, and take Santa-costume selfies might sound a little, well… underwhelming.

But humble as it was, love was there. Given the opportunity to do something in response to climate change, people embraced this power which no system or government can take away. They organized themselves, creating art, writing songs, cooking for friends, bringing gifts to share, spreading the word to their communities and loved ones.

The result was beautiful. We raised over twice as much as we had originally aimed for. We wrote some thoughtful creation-oriented carol lyrics and made great music. But most importantly, our hope was renewed. As we offered our diverse and eclectic gifts, we discovered anew that we do have power together to heal the earth, small and vulnerable though our efforts may always be.

And there, in one unassuming church building just off Kingsway and Windsor, Christ was born once again, in our hearts and in the world…

Jason Wood is Earthkeepers’ Civic & Political Engagement Lead and was lead organizer for “Carols for the Climate“, a musical Christmas event on December 16, 2017, raising money for the PullTogether campaign.